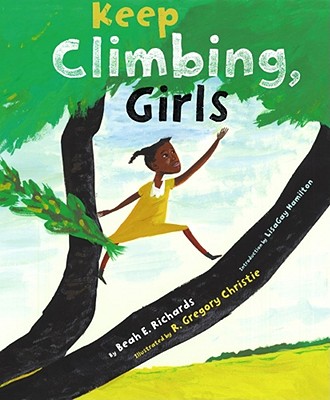 The only way to make a bid
for a girl's equality is to climb right up to the
toppermost bough
of the very tallest tree.

The dynamic ode to girl power was written by noted Afro-American actor, poet, and playwright Beach E. Richards. First published in 1951, her poem is given new life in this edition that includes an introduction by LisaGay Hamilton and stunning illustrations by R. Gregory Christie. With its inspirational messsage, this book will empower children with the realization that "the path of life goes up and up/not down!"

Beah E. Richards (1920-2000) was born Beulah Elizabeth Richardson in Vicksburg, Mississippi, where the number-one rule in her parents' home was, "The bottom is overcrowded so strive for the top!" She came to New York in 1950. Her first significant stage role was in 1955, playing an elderly woman in the off-Broadway play Take a Giant Step. She developed a career as a prolific actress, playwright, and published poet, receiving a Tony nomination for her role in James Baldwin's The Amen Corner, and garnering an Oscar nomination for her part as Mrs. Prentice in Guess Who's Coming to Dinner. In 1988 she won an Emmy for her role on Frank's Place, and in 2000 she won an Emmy award for her role on The Practice. LisaGay Hamilton accepted the award on behalf of Ms. Richards, and delivered the Emmy to Beah in Mississippi. Ms. Richards died two weeks later.

LisaGay Hamilton wrote and directed the award-winning documentary Beah: A Black Woman Speaks, which chronicles the life of Beah Richards. Ms. Hamilton was a series regular for seven years on the television drama The Practice as Rebecca Washington. Along with Beah Richards, Ms. Hamilton appeared in the movie adaptation of Toni Morrison's novel Beloved. She is a graduate of the Juilliard Drama Division.

R. Gregory Christie received a Caldecott Honor for his illustrations in Freedom in Congo Square, written by Carole Boston Weatherford. He is a three-time recipient of The New York Times’s 10 Best Illustrated Children’s Books of the Year Award, a six-time recipient of the Coretta Scott King Honor Award in Illustration, and a winner of the Boston Globe­–Horn Book Award, the NAACP’s Image Award, and the Once Upon a World Children’s Book Award from the Museum of Tolerance. Visit Mr. Christie’s website at Gas-Art.com.