Skip to main content
The store is currently open for in-store shopping 12-5pm, Tuesday to Saturday. Please place orders here for pick up or shipping. Or call (510)-525-9633. Read this for more about ordering books from the website.

Smart About Sharks! (About Animals) (Hardcover) 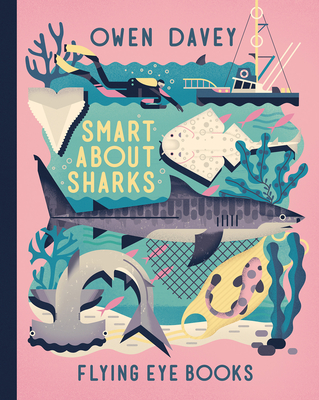 It’s time to learn about the sea’s most feared (and most misunderstood) residents: sharks!

Owen Davey returns to nonfiction to explain the mysteries of those denizens of the deep. Some deadly, some not-so-deadly, and almost all just generally misunderstood. Exciting and detailed illustrations fill the page and educate young readers about these thrilling residents of the sea! Delivering information with the same whimsical text and brash illustration that saw his previous book win the affection of the Wall Street Journal, Smart About Sharks is sure to have teeth!

Owen Davey is a freelance illustrator, living and working out of Leicester, United Kingdom. He graduated with a First Class BA in Illustration from Falmouth University. Davey's work has been published in every continent (except Antarctica), including picture books in the United Kingdom, America, Australia, Germany, France, Portugal, China, and Korea. He has worked for some impressive clients, including the New York Times, Microsoft, and Orange. This is his first book about sharks.

It's an engaging and visually sophisticated addition to shark-lovers’ libraries.
—Publisher’s Weekly

This book’s engaging informative content is rivaled only by its uncommonly sophisticated illustrations. [...] An all-around superior nonfiction resource.
—Booklist

I love children’s books that are as delicious for kids as they are for adults, and Smart About Sharks is exactly that. With a sumptuous textured cloth cover, an appealing gray-tinted palette of earth tones playfully punctuated by pink, and a retro encyclopedic design, Smart is filled with fascinating bite-sized shark facts that were completely new to me.
—BoingBoing

A beautifully illustrated compendium of facts about sharks [...]
—Creative Review

Kids love sharks. Owen Davey's Smart About Sharks is going to jump off the shelves and demand to go home with these kids. What's not to love? There are great infographics giving out wild information (wait until you see all the different kinds of teeth found in sharks across the world), bright, brilliant artwork with a retro feel to it, and tons of facts about sharks, including a debunking of their status as maneaters: if you're on a surfboard, you look like a seal, and the book has the artwork to prove it.
—Books For Kids

"Smart About Sharks," by Owen Davey, has illustrations to die for and fun facts to marvel at.
—Campus Circle

Each page is perfectly balanced with educational facts intermixed with lively sharks that look as if they are swimming in and out of the pages. This well researched book will immerse all readers in fascinating facts about the most well-known predator of the seas.
—OmniLibros

I learned a great deal that I didn't know about sharks, and I think that a 7 or 8-year-old would have a great time with this book. [...] More importantly, this book is a great introduction to nonfiction reading for children.
—The Cyberlibrarian

Owen Davey does it again, this time about sharks! […] this book will delight every reader. This series is definitely recommended to anyone with an affinity for science!
—The Tiny Activist

“Stunningly illustrated and filled with fascinating facts, the children in my class have loved using this as a stimulus for writing about sharks they’ve invented themselves!”
—Mr. Payne Reads